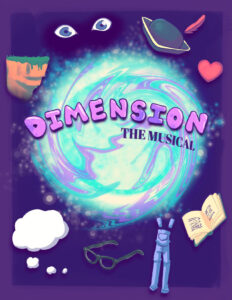 Blue Water Theatre Company is proud to produce Dimension: The Musical, an original work by student Talia Segal. Talia is a tenth grader at PiM Arts High School. She has been writing Dimension: The Musical for over four years and it is finally done! Talia has been an actor in many shows, both at Blue Water and other places. This will be Talia’s directing debut. She hopes everyone will enjoy the show!

Dimension: The Musical follows the story of Thor, a 15 year old boy, and his adventures when he gets trapped in another dimension. Along the way, he’ll meet tons of different, interesting people including Ellie, Thomatchio (the chief), and many others. Get ready for a wild ride as Thor struggles to find his way back home again!

This student-directed show is being produced on a small budget, making use of costumes, props, and set pieces that are on hand. The tuition fee for this production is $25.00.

Check out a small sampling of the musical numbers in the show.

What Side of the War

One pianist and one drummer are also needed for the show. Musicians can email auditions@bluewatertheatre.com to express their interest in participating.

In-person auditions were held on January 31st and February 1st..

We are seeking additional ensemble members. To audition for an ensemble role, send a link to a video of you singing and reciting your monologue to auditions@bluewatertheatre.com by 5:00 pm on Tuesday, February 28th. Put your full name and “Dimension” in the subject line of the email. You must also fill out the ACTOR AUDITION FORM.