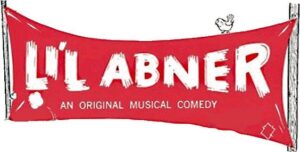 THANK YOU to everybody who auditioned for our production of LI’L ABNER. To view the cast list, click HERE.

Our first FULL CAST rehearsal will be held on Monday, June 25 beginning at 9:00 in the morning at BWTC. Please note that the week of June 25-29 will not be leads-only as previously announced; any and all cast members should expect to be called. But if you marked a conflict within this week on your audition form, it has been noted.

If you have any questions about the casting, the rehearsal schedule, or if you would like feedback on your audition, please contact Sam Weisberg. Note, however, that if you had more than a few days of absences on your conflict sheet, and didn’t get cast, that is probably the reason, as the summer show really does need “all hands on deck” for as much of the entire time as possible.

If you auditioned for the show, did not get cast, but are interested in potentially being on the crew for LI’L ABNER or for our elementary school production of THE LION KING KIDS, please contact Charlie Leonard.

Blue Water Theatre Company is pleased to announce upcoming auditions for our production of Li’l Abner, set to run from July 27 through August 5.

Li’l Abner is a madcap comedy with a wild, energetic score that follows the hick residents of Dogpatch, U.S.A., as they try to save their town from nuclear annihilation. A send-up of American politics, hillbilly caricatures, and gender roles, Li’l Abner features a zany cast of characters, like Daisy Mae, who’s pining after Li’L Abner, Earthquake McGoon, who’s pining after her, and the evil business tycoon General Bullmoose, who’s pining after all the money in the world. Featuring miracle elixirs, ineffective politicians, and shady deals—alongside classic numbers like “Jubilation T. Cornpone” –Li’l Abner is a ridiculous romp that’s perfect for summer fun!

AUDITIONS: Auditions are open to all student actors who are currently in grades 6 through 12 (2017-2018 school year). Actors who wish to audition should come to their choice of the following three audition times:

Actors do not need to prepare anything in advance of their audition, although each actor must fill out and bring with them an “Actor Information Form,” which can be downloaded by clicking HERE. Please note that a parent signature is required in order to be considered for the production.

At each audition session, music selections, acting sides, and/or choreography excerpts will be taught to the entiregroup, after which the directors will see actors individually and in small groups.

If you would like to audition for the show, but are unable to attend any of the scheduled audition times, please get in touch with Sam Weisberg to make alternative arrangements.

CASTING: We are intending to cast approximately 35 actors in this production. The final cast list will be posted by 4:00pm on Wednesday, June 6.

It is expected that all actors are available for all of the rehearsals, however we are often able to accommodate a few conflicts. Please be in touch with Sam Weisberg if you have questions about the schedule prior to your audition, and do make sure to thoroughly and accurately note any conflicts you may have on the “Actor Information Sheet” that you turn in at your audition.

LOCATION: All auditions, rehearsals, and performances will be held at Blue Water Theatre Company in Wayzata, Minnesota (605 Rice Street East).

PRODUCTION FEE: The fee for an actor to take part in this production is $355, which is due to BWTC by Friday, June 22 (the last business day before principal/supporting rehearsals begin the following Monday). Those payments can be made by check or credit card, via a secure online payment site that will be emailed to parents once the show has been cast.

Scholarships are available to families who need them. In order to apply for a scholarship, please contact Sarah Irwin (BWTC’s Office Manager). Please note that in order to be considered for a scholarship, Sarah must have your application on file before you show up to audition. We have a limited number of scholarships that we can give out for each show, and we may not be able to honor requests that are made after a show has been cast.