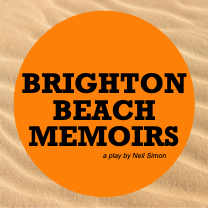 Thank you to all who auditioned for our upcoming production of “Brighton Beach Memoirs” this week, and congratulations to our cast:

The cast should plan to meet in the downstairs studio @  BWTC for our first rehearsal from 7:00-9:30 on Monday, May 6.

We are excited to be announcing auditions for our spring play, Neil Simon’s famous dramatic comedy BRIGHTON BEACH MEMOIRS.

It is 1937 in Brooklyn during the heart of the Depression. Fifteen-year-old Eugene Jerome lives in Brighton Beach with his family. He is witty, perceptive, obsessed with sex, and forever fantasizing his baseball-diamond triumphs as a star pitcher for the New York Yankees. As our guide through his “memoirs,” Eugene takes us through a series of trenchant observations and insights that show his family meeting life’s challenges with pride, spirit, and a marvelous sense of humor. But as World War II looms ever closer, Eugene sees his own innocence slipping away as the first important era of his life ends — and a new one begins.

This production will be directed by Charlie Leonard.

AUDITIONS:
Auditions for Brighton Beach Memoirs will take place by appointment on Monday, April 29 and Tuesday, April 30, with callbacks (if necessary) scheduled for 7:00-9:00pm on Thursday, May 2. Click HERE to schedule your ten-minute audition time.

Please come prepared with a 1-2 minute comedic or dramatic monologue of your choice.

Also, please complete the online BRIGHTON BEACH MEMOIRS ACTOR INFO SHEET & AUDITION FORM. This must be completed and submitted prior to your audition.

CASTING INFORMATION:
There are just seven characters in the show — four women and three men. Eugene, the protagonist, an almost-fifteen-year-old boy who spends all day dreaming about baseball and girls. Stanley, Eugene’s older brother, who is struggling with being on the cusp of adulthood and all the responsibilities that entails. Kate, their mother, who works hard to keep the family together while also dealing with drama associated with her sister and her sister’s daughters. Jack, their thoughtful and kind father, who works multiple jobs in an effort to keep the family financially afloat. Blanche, their aunt (Kate’s sister), who, along with her daughters, moved in with the family after the death of her husband. Nora, Eugene & Stanley’s very beautiful sixteen-year-old cousin (Blanche’s oldest daughter) who dreams of starring on Broadway. And Laurie, Nora’s 13-year-old younger sister who suffers from some health issues.

It is likely that Laurie will be played by a 7th or 8th grade girl, but a younger-looking high school girl is not out of the question. Eugene is most likely to be a boy in the 8th-10th grade range. The rest of the characters (Stanley, Nora, Kate, Blanche, and Jack) will all be played by high school actors.

CONTENT WARNING:
This show would probably safely be rated PG-13 were it a movie. There is a mild amount of profanity, and the two brothers have some graphic discussions about sex. Parents of 7th or 8th graders who wish to audition (they would be considered for Eugene or Laurie) should familiarize themselves with the plot beforehand. Feel free to contact Charlie Leonard if you have any questions.

REHEARSALS:
Rehearsals will begin on Monday, May 6, and will generally take place on Monday, Tuesday, and Thursday evenings, and during the day on Saturdays. However, due to the complexity of the end of the school year (and our own conflicts with other BWTC shows), the actual schedule does jump around a bit. Please refer to the BRIGHTON BEACH MEMOIRS ACTOR INFO & CONFLICT SHEET for the exact rehearsal schedule.

PERFORMANCES:
The show will have four performances from June 13-16.

PRODUCTION FEE:
The fee for an actor to take part in this production is $195, which is due to BWTC by Tuesday, May 7 (the second rehearsal), unless alternate arrangements have been made. Those payments can be made by check or by credit card via a secure online payment site that will be emailed to parents and posted on this page once the show has been cast.

Scholarships are available to families who need them. In order to apply for a scholarship, please contact Sarah Irwin (BWTC’s Managing Director). Please note that in order to be considered for a scholarship, Sarah must have your application on file before you show up to audition. We have a limited number of scholarships that we can give out for each show, and we may not be able to honor requests that are made after a show has been cast.

QUESTIONS:
If you have any questions, please contact Charlie Leonard