Thank you to all of the actors who auditioned for NEWSIES this week! The cast list can be viewed by clicking HERE. Please do take time to carefully read the letter at the front of the cast list, as it contains some important information about the start of rehearsals as well as some narrative explanation of a few casting issues.

Scripts are rented materials, and must be returned at the end of the show. In order to receive a script tomorrow, you must bring a $25 deposit (cash or check). We will return that money to you in December once you return your script safely to us. Please do not forget this deposit tomorrow, as you will not receive a script with out, and will be forced to look on with somebody else during the read-through.

If you have questions, please contact Charlie Leonard (charlie.leonard@bluewatertheatre.com) 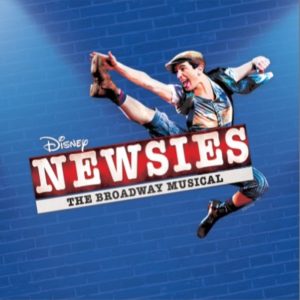 When I was a young middle school teacher and director many, many years ago, there was no show that was more requested by my young actors than Newsies. Unfortunately, at that time there wasn’t a stage version of the show available — only the movie. Since then, all that has changed. After it’s premiere on Broadway in 2012, the musical version of Newsies played over 1,000 performances, and has since become a staple of community and youth theatres all over the country. I can’t tell you how excited I am that we are bringing this to the BWTC stage this fall!  – Charlie Leonard, director

ABOUT THE SHOW: Though hardly needing an introduction, it’s worth noting that Newsies is based on real historical events — namely the 1899 newsboys strike in New York City. It was a youth-led campaign to force the major newspapers to change they way they compensated their salesforce, which was primarily made up of kids hawking the papers on the streets. The strike was ultimately successful, and inspired Disney’s enormously popular 1992 film, which later led to the successful Broadway adaptation.

WHO CAN AUDITION? Auditions are open to actors in grades 6 through 12. However, priority will be given to high school actors. Those actors in grades 6 through 8 who audition are encouraged to also audition for our fall production of Frozen JR, so that we have a place we can possibly put them if they do not make Newsies. Information about Frozen JR can be found by clicking HERE.

HOW DO AUDITIONS WORK? We will be holding open auditions at Blue Water Theatre Company on the following three evenings:

Actors who wish to audition simply need to show up to one of those three evenings. You do not need to prepare any material ahead of time; we will provide you with what you need the night of your audition. However, you must sit down and complete the online NEWSIES ACTOR INFO/CONFLICT FORM prior to your audition, so that we have some information gathered about you before you come.

**NEW** We would also like actors to RSVP in advance to tell us which night they are coming. You can do that by clicking HERE. It is not required that you RSVP, but it is helpful if you do so and if you self-select whichever night has the fewest amount of people already signed up. We expect a lot of interest in this show, and audition nights may be very busy. It is to your advantage if you all try your best to have an even number of people attending each audition session, rather than one night where “everybody” comes and one night where “nobody” comes.

Callbacks for select actors will take place on Saturday, September 14 from 9:00-11:30am. A list of actors who are needed at callbacks will be posted by noon on Friday, September 13.

If you wish to audition, but cannot make any of the scheduled audition times, please contact Charlie Leonard at charlie.leonard@bluewatertheatre.com to make alternative arrangements.

WHEN ARE REHEARSALS? Regular rehearsals begin on Monday, September 16 and run through Saturday, November 30. They will take place on the following schedule:

There will obviously be no rehearsal on Thanksgiving (Thursday, November 28), but there will be rehearsal over MEA break (October 17-20). Make sure that you indicate all rehearsal conflicts when filling out the online form (linked above).

WHEN ARE THE DRESS/TECH REHEARSALS AND PERFORMANCES? There will be four dress/tech rehearsals and seven performances. They will be held on this schedule:

WHAT IS THE TUITION TO TAKE PART IN THIS PRODUCTION? Actors who are cast in Newsies will pay a $375 tuition fee. This fee helps to cover the cost of show licensing, production materials (costumes, sets, etc), staffing, and building usage. Partial and full scholarships are available for those who need assistance. If you would like to inquire about scholarship availability, please contact Blue Water’s office manager — Alison Haseman — at alison.haseman@bluewatertheatre.com.

QUESTIONS: If you have any questions about Blue Water Theatre Company’s production of Newsies, please contact Charlie Leonard at charlie.leonard@bluewatertheatre.com.