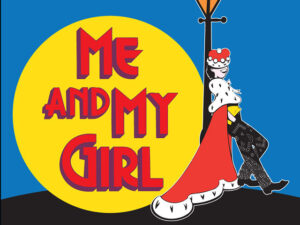 Thank you to all who auditioned for Me and My Girl.

The full cast should plan to attend the first rehearsal on Monday, July 15 from 9:00-4:00. If you wish to pick up your scripts ahead of time, please contact Charlie to make arrangements.

“Has uncorked the innocence of the old-fashioned musical comedy so ingenuously that for once a theatregoer is actually sucked directly into that sunny past rather than merely suckered into nostalgia for it.” – The New York Times

“A honey. It has humor, music, dancing, charm, wit and a deft expertise and that takes your heart away.” – New York Post

“The freshest and funniest musical to hit Broadway in ages.” – Newsweek

The late Viscount Hareford had a youthful, unfortunate marriage – and kept discreetly out of sight was a son and heir. The Hareford Hall set are despondent when the family solicitor finds the legitimate heir in the less than desirable Lambeth area of London. When Bill is brought to Hampshire, he is forced to decide if he should fit in with high society and lose his Cockney roots and his girlfriend.

This production will be directed by Charlie Leonard, with music direction by Chris Larson and choreography by Barb Brauch.

AUDITIONS (***NOTE THE AUDITION TIMES HAVE CHANGED FROM WHAT WAS FIRST ANNOUNCED***):

Auditions are open to student actors who are currently in grades 6 through 12 (2018-2019 school year). Actors who wish to audition should come to their choice of one of the following two audition times:

Actors do not need to prepare anything for their audition. Music selections and acting sides will be provided to all actors (and taught to them) while they are with us on one of those evenings.

NOTE: If you cannot attend either of the audition times, we will happily set up an alternate audition time for you. Please contact Charlie Leonard to set something up. We just ask that all auditions are completed by Tuesday, June 25.

Callbacks for select actors will be held on Thursday, June 27 from 7:00-9:30 in the evening. A list of actors who are needed at callbacks will be posted on this page on Wednesday, June 26.

CASTING:
The final cast list will be posted here by Monday, June 24. We are looking to cast between 35-40 actors in this production.

REHEARSALS:
Rehearsals will begin on Monday, July 15. They will take place from 9:00-4:00 daily (Monday through Friday) through Thursday, August 15.

All actors are expected to be available for every rehearsal, although they may not be needed at every single one.

PERFORMANCES:
We will have present eight performances of Me and My Girl, at which attendance is mandatory except in extremely rare circumstances. Those dates & times are as follows:

PRODUCTION FEE:
The fee for an actor to take part in this production is $355, which is due to BWTC by Monday, July 1, unless alternate arrangements have been made. Those payments can be made by check or by credit card via a secure online payment site that will be emailed to parents and posted on this page once the show has been cast.

In addition, actors will be required to bring a separate cash/check deposit of $25 to the first rehearsal in order to be issued a script. That same $25 will be given back to the actor at the conclusion of the show once their script has been successfully returned.

Scholarships are available to families who need them. In order to apply for a scholarship, please contact Sarah Irwin(BWTC’s Managing Director). Please note that in order to be considered for a scholarship, Sarah must have your application on file before you show up to audition. We have a limited number of scholarships that we can give out for each show, and we may not be able to honor requests that are made after a show has been cast.

QUESTIONS:
If you have questions specific to our production of Me and My Girl, or about Blue Water in general, please contact Charlie Leonard, Artistic Director & Founder