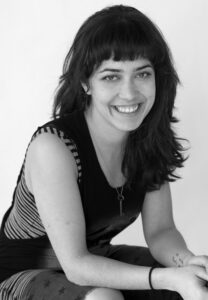 Maridee Slater is a world, story and person-builder. Sometimes she makes with her hands (as a painter, carpenter, and welder), sometimes with her head (as a director and arts administrator), sometimes with her body (as a choreographer and dancer), and often by encouraging, prodding, and cheerleading others to realize their creative potential. Always, she makes with her heart and an unstoppable enthusiasm — she has mountains of it. Maridee holds an MFA in Directing from Columbia University, and BFAs in Acting/DIrecting and Technical Design from Colorado Mesa University. During the 2016 election, she was a Visiting Associate Professor of Theater in Colorado, which reignited a passion for social discourse and community building. Maridee has taught at Drew University, the University of Washington, Cornish College of the Arts, Marymount Manhattan College, among others. She was Technical Director and resident designer for Horace Greeley High School in 2018/2019. Since 2013, she has taught Creating Original Theatre for the High School Summer Immersive Program at Columbia University. In 2015, she received a Shubert Foundation Scholarship to assist in the development workshop for Waitress: The Musical and Blackout: House. She has worked with myriad companies in the US and Europe, including Intiman, Seattle Rep (where she was a carpenter and welder for over 35 shows, including Shrek on Broadway), The Guggenheim, SITI Company, Tectonic Theater Project, Seattle International Children’s Festival, Ontreoerend Goed from Belgium, Chashama Times Square, The Bushwick Starr, Degenerate Art Ensemble, P3 East, and Barn Arts. 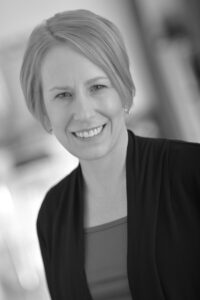 Lela Olson is a leader, educator, and actor. Working as Blue Water Theatre Company’s Managing Director is the perfect way for her to unite these roles while continuing to serve youth.  She has worked as a teacher, teacher leader, and administrator in the field of education for over 20 years. Lela earned bachelor’s degrees in Elementary Education and Education of the Deaf/Hard of Hearing at Augustana University in Sioux Falls. She earned a master’s degree in Educational Policy and Administration and a PhD in Work and Human Resource Education while attending the University of Minnesota. Lela served on the Minnesota Boychoir’s Board of Directors and led its Diversity, Equity, and Inclusion Committee. She is a trained mediator. No matter what the role, her focus is on helping people and organizations learn, grow, and thrive. Acting tops the list of Lela’s favorite pastimes. Her first role was in Carousel when she was in 5th grade, and she’s been acting ever since! Being active in theater arts while growing up taught Lela about teamwork, taking risks, and overcoming obstacles. It also built confidence and was the source of great friendships. As an adult, Lela works with several theatres in the area including The Phipps, Lyric Arts, Century College, Lakeshore Players, and Black Dirt Theater. In addition to acting in her spare time, Lela loves to travel internationally. Her favorite destinations are Egypt, Italy, and Peru. She lives near downtown St. Paul and enjoys concerts in Mears Park and regular trips to the farmer’s market. 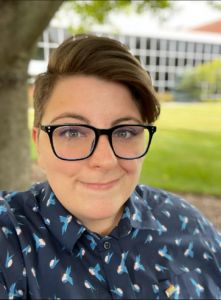 Over the past fifteen years, Kade Gundlach has participated in hundreds of theatrical events in Southeastern Wisconsin as technical director, project manager, consultant, designer, director, and more. Kade graduated from the University of Wisconsin-Whitewater with a BFA in Theatre with an emphasis in Technical Direction and served as President of the Fort Atkinson Community Theatre (FACT) from 2017 to 2020. New to the Twin Cities, Kade is excited to get to work and continue building the theatre community for generations to come. Notable credits include: Freaky Friday (Director), Laundry and Bourbon (Technical Director & ACTF Honorable Mention), Animal Farm (Assistant Technical Director), Lucky Stiff (Lighting Design), Run for Your Wife (Director), 12 Angry Men (Director), Dear Ruth (Technical Director), The Addams Family Musical (Lighting Design and TOMMY Award Winner) and Annie (Artistic Director). 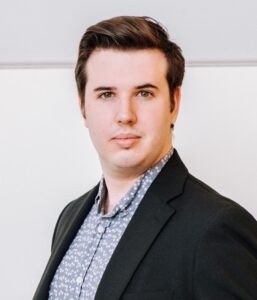 Eli Aronson, tenor, earned his B.M. in Vocal Performance with a focus in vocal pedagogy from St. Olaf College. He has performed with Cedar Rapids Opera Theater, Halifax Summer Opera Festival, and Journey North Opera Company. Notable performances include Les Contes d’Hoffmann, Into the Woods, La Canterina, L’incoronazione di Poppea, A Midsummer Night’s Dream, Brigadoon, and Turandot. He is also a frequent choral performer, having sung with the St. Olaf Choir and having served as the tenor section leader for St. John’s Episcopal Church in Minneapolis. Eli also runs a voice studio where he focuses on cross training the voice to sing everything from pop to classical and everything in between. When not onstage, he enjoys Netflix, a good fantasy book, and trying new restaurants and breweries around the Twin Cities. 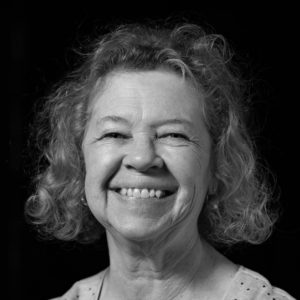 Barb Brauch graduated with her education degree from the College of St Catherine in St Paul, MN, received her Master’s degree from St Cloud State University, and later received another Bachelors’ degree from Augsburg College, Minneapolis. Barb retired from teaching at Wayzata West Middle School having spent her entire thirty-four-year career in that building. She received dance training for three years with The Minnesota Dance Theatre.  The ten years Barb spent dancing and teaching at the Dance Shoppe came in handy when she and Charlie joined forces to create musicals.  She was one of the original board members of Blue Water Theatre Company where she was board chair for five years.  Her musical theatre choreography credits include:  No, No Nanette, The Music Man, How to Succeed In Business Without Really Trying, Into the Woods, You’re a Good Man Charlie Brown,  Babes in Arms, Joseph the Amazing Technicolor Dreamcoat, Pirates of Penzance, Beauty and the Beast, Annie Get Your Gun,  Bye, Bye Birdie, 42nd Street, Funny Girl, Anything Goes, Guys and Dolls, Fiddler On the Roof, Once Upon a Mattress, State Fair, Chitty Chitty Bang Bang, Big Fish, and The Wind in the Willows. Barb is also the director/teaching and choreographer of a tap dance entertainment group called, “The Satin Dolls,” who perform weekly around the Twin Cities metro area.  This group is also, “The Senior Dancers,” for the Minnesota Lynx and Timberwolves basketball teams. When she’s not dancing or preparing choreography, she enjoys reading, theater, and doing anything with her grandchildren!  She thanks her husband of thirty-six years for understanding that she’s “Gotta Dance!”

Janine has been a music educator and director in the Robbinsdale Area Schools since 2006.  She currently teaches elementary music at FAIR Pilgrim Lane, an arts magnet school.  She has also served as choir director at Plymouth Middle School.  Janine has co-directed the 5th Grade Robbinsdale All-District Choir since 2021. She received her Bachelors of Music Education degree from the University of Wisconsin – Eau Claire.  Janine earned her masters in education from St. Mary’s University of Minnesota. When not teaching, singing, or performing, Janine loves being outdoors hiking and mountain biking and taking road trips with her family. 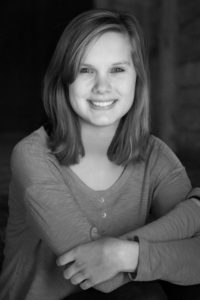 Mary has been choreographing since 2004. Before joining BWTC, Mary worked for Front Porch Musical Theatre for seven years. Mary teaches science in the Juntos Spanish-immersion program at Hopkins North Junior High School, and also has choreographed both at Hopkins North and at Hopkins High School. Mary learned Spanish through Concordia Language Villages and through studying abroad in Nicaragua and Spain. She went to college for Biology at Humboldt State University in the beautiful redwood forest of the northern California coast.

Chris Larson is in his tenth year as vocal music director at Wayzata Central Middle School. He received his Bachelors Degree in Vocal Music Education from Cornerstone University in Grand Rapids, MI and his Masters Degree in Music Education at the University of St. Thomas in St. Paul, MN. Chris has performed as a member of the Grand Rapids Opera, Cornerstone University Chorale and Chamber Choirs, The Singers – Minnesota Choral Artists, and the VocalEssence chorus, as well as in musical theater. Recently he was the featured tenor soloist in the Mozart Requiem, performed by the St. Thomas Festival Choir.  He currently serves as co-chair of the ACDA-MN All-State Boys Honors Choir. In Wayzata, he has served as director of the CMS spring musical, and music director for the summer youth theater program, the Blue Water Theatre Company. In his spare time, he enjoys biking, running, playing guitar and keyboard with Bethany Larson and the Bees Knees, and hanging out with his wife Vanessa, son Simon, and his dog Penny.

Maureen feels incredibly lucky to be a part of the BWTC team, after spending many years of her youth as an onstage participant! After earning her BFA in Musical Theatre from Minnesota State University, Mankato, Maureen moved home to Minneapolis, where she has continued to work as an actress and arts educator. Maureen has worked with several theatres in the Twin Cities including The Old Log Theatre, Walking Shadow Theatre Company, and Lyric Arts. Maureen also runs her own acting and audition coaching business. When not onstage, she can be found with her nose in a book, playing a variety of instruments, or chasing strangers down the street to ask if she can pet their dogs.

Scott Stafford is a dancer, movement director, and teaching artist. Originally from Detroit, Michigan, his work has been presented at various Twin Cities venues including The Walker Art Center, Southern Theater, Red Eye Theater, Park Square Theater, The University of Minnesota, and Fresh Oysters Performance Research. He’s performed as a dancer nationally and internationally, and competes in the ballroom scene as Edward.007 in the category of European runway and new way vogue performance. He believes that expression is vital, and accessible to every individual. For more information, visit scottestafford.com